“Batu! Batu!”, the man on the bow yelled as our wooden boat ploughed through the turbulent rapids. He was gesturing frantically to the driver to steer us away from imminent danger.

Hitting a rock at this speed would spell disaster and send me, the eight other passengers and our two crew overboard into the white water to meet our fate. When we finally managed to make it through unscathed, there were nervous cries of relief and excitement from everyone on board. However, our Dayak bowman cried out encouragingly, “Just four more big rapids!”, and we again looked ahead with great apprehension. Sure enough, there in the distance lay more churning water. 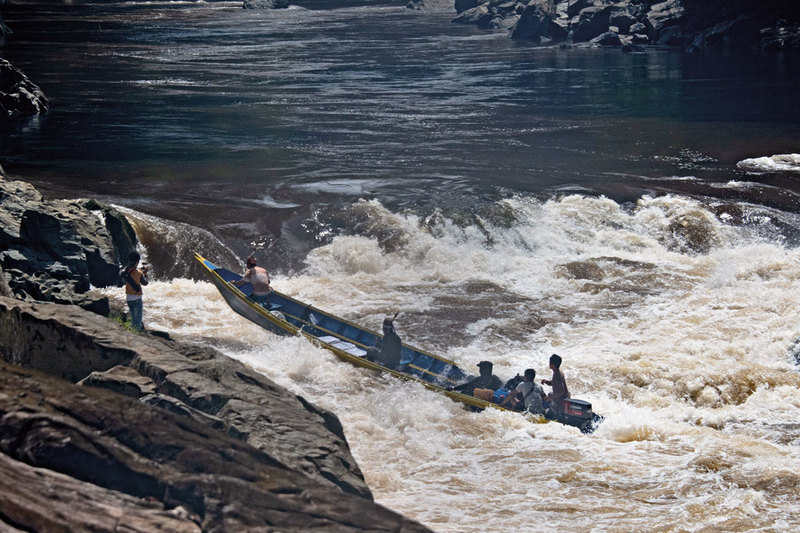 I was to learn firsthand that there were seventeen sets of rapids on this part of the river. In some cases, we decided to opt for the safer option, getting out of the boat and walking along the riverbank to meet the boat further ahead.

I must admit I was in awe of the skill of the boatmen as they navigated their way through these rapids with such courage and skill, having to time powering up the engine with such precision and steer so delicately between the rocks, which were mostly below the surface of the water. The communication between the person at the front of the boat steering and watching out for the hazards, and the man at the back controlling the thrust of the engine is critical, and one false move could spell disaster. The responsibility for the fate of the passengers was very much in the hands of these two brave souls. 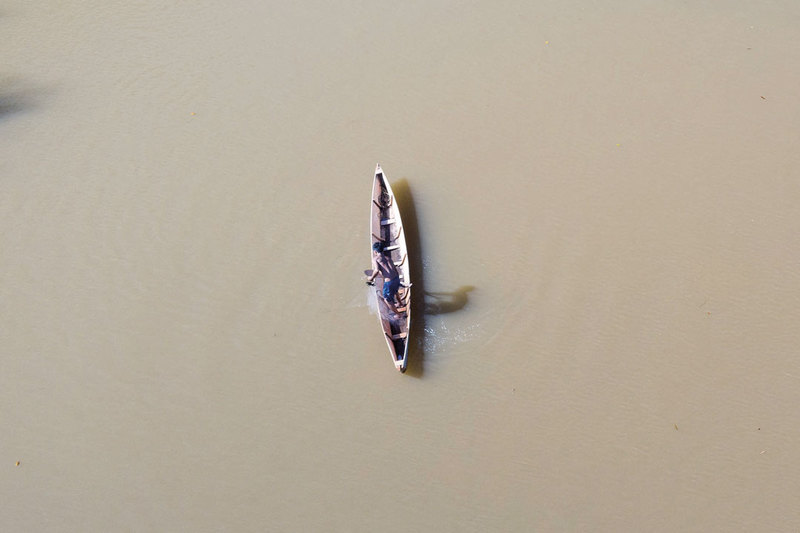 I comforted myself with the knowledge that these boatmen know these Kalimantan rivers intimately and have many years of experience. However, I was also aware that people had died in these rapids. Still, these days powerful outboard engines make it much safer than in the past when boatmen had to try and navigate through these waters with only oars and muscle power.

So why was I travelling up these rivers with no life jacket, nor head protection and putting my life into the hands of strangers, deep into the heart of the Borneo jungle? A combination of curiosity, a sense of adventure and a touch of stupidity I think is the best answer to that question!

To some degree, too, I was a man on a mission. I was fascinated to find out more about, and spend time with, the Dayak Punan who live in the forests of West Kalimantan in the Kapuas Hulu regency. 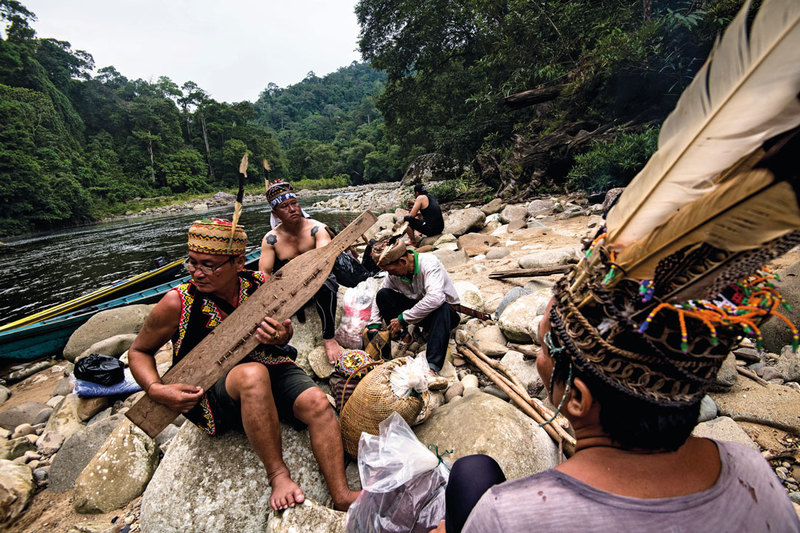 The regency covers a large area of 29,842sqm (Bali, for example, is just 5,000sqm) with some of the world’s most abundant biodiversity and oldest rainforest. It is a place where many Dayak cultures still live in traditional longhouses, in harmony with the forest. The rampant deforestation and palm oil that has impacted so many other parts of this island (the world’s third-largest) has not reached Kapuas Hulu—yet.

Despite its size, Kapuas Hulu is home to just 230,000 people, mostly Dayak that live in small communities beside the rivers on which they depend for their food, clean water and transport.

The Punan is just one of over 400 Dayak tribes that live in Kalimantan (Indonesia Borneo), and in Sarawak and Sabah (Malaysia Borneo). While little is known about the Punan, they are believed to be the original Dayak who have been in the forests of Borneo for many thousands of years.

Our journey began in the small district city of Puttisibau. After we had driven an hour east along the mighty Kapuas River in the direction of its headwaters in the Muller Mountains. We packed our gear into a waiting boat and travelled for two hours, with gentle forest on either side of the river, to the small village of Sepan, our home for the night.

The Punan still adhere firmly to an animist belief system, calledBesavik and depend entirely on local forests and rivers for their food supply. Their strong culture was reflected in a performance that was staged in our honour that evening. I learned that the traditional dances and songs they shared dated back to ancient times. I will never forget witnessing the men firstly, then the women and children dancing together to the sounds of the Sape (traditional Dayak guitar) that evening. Later in the evening, the elders danced outside the under the star-filled Borneo sky. They were paying homage to their ancestors and performing as they had been for thousands of years, surrounded by the original forests and animal sounds of the jungle. 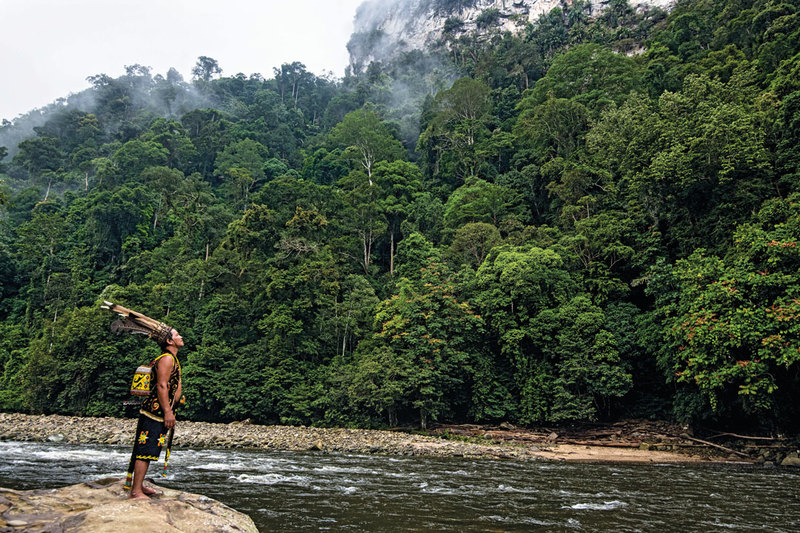 The next morning, we headed further up the Kareho River towards the mountains. Our adventure was far from over, as we confronted yet more rapids before arriving at our camp spot after nightfall about six hours later.

That evening, a special ritual was performed by the Kepala Adat (spiritual leader) Mr. Pokim, asking the spirits permission for us to stay there that night and asking them to protect our group from any harm.

The next morning, we awoke to the most incredible sight of karst pinnacles towering above us, partly shrouded in mist. Some of the Punan expressed their joy by dancing and singing in appreciation of that special moment.

The forests in this area are mostly protected for now. Still, with the new national capital proposed further to the East, there are plans to build a highway that will connect West Kalimantan with the East. This road will pass very near the villages where the Punan live, along the Kapuas and Kareho rivers. Their world is about to change. 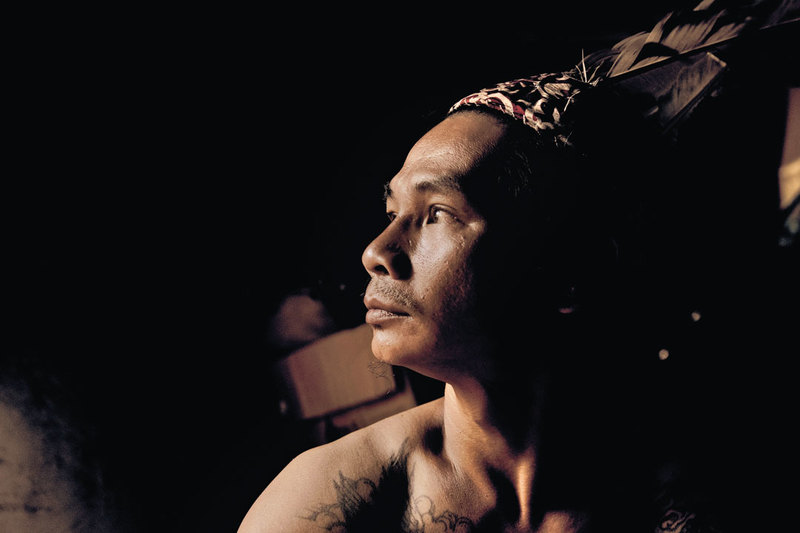 I spoke with Mr. Tahai Tonyok, the Kepala Desa (village head). I asked him what he felt about the modern world coming into their community in the future. “We are happy because this road will give us better access to schools so that our children can get an education, and we will be closer to health facilities which we don’t have now. But I am also afraid that we will lose our culture as the children are influenced by others and may feel a need to leave the community and perhaps they will not return.”

Fortunately, the community have an ally in Stephanus, a Dayak man who plans to set up a training centre in Puttisibau, the town closest to the area. His aim is to educate young people to become entrepreneurs and cultural tour guides and to create sustainable jobs that will protect the forests and the Punan ways into the future. 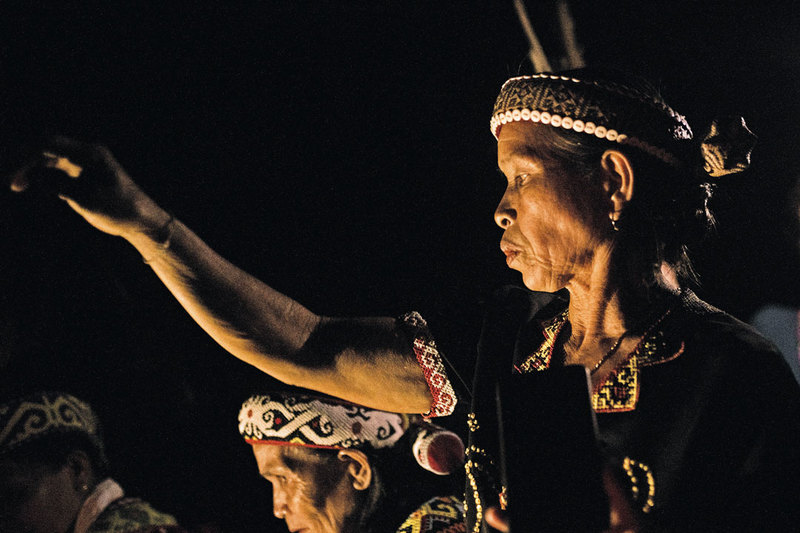 I returned from the journey with nothing but respect and admiration for the Punan community, the elders and the young people who are determined to find a way to blend the modern world that is coming and the wisdom passed on down through generations, so the next generation can have a secure and happy future.

If you are interested to learn more about the Punan and become involved in helping them with community projects to protect their future, please contact David by email at davidmetcalf312@gmail.com

David Metcalf is a resident of Bali, an author, film producer, professional photographer and specialises in taking people on cultural/photography tours. He supports educational, literacy projects in Kalimantan and creates large indigenous gatherings in Indonesia www.davidmetcalfphotography.com. 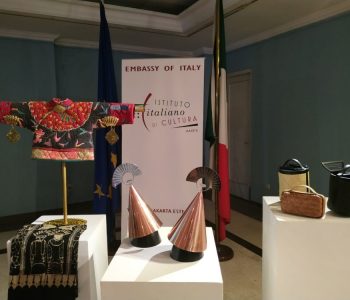 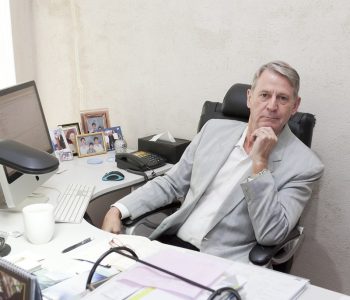 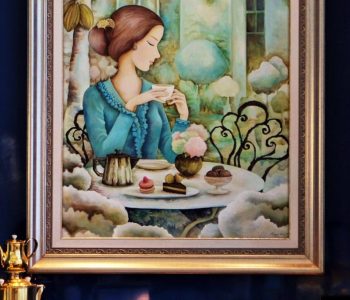 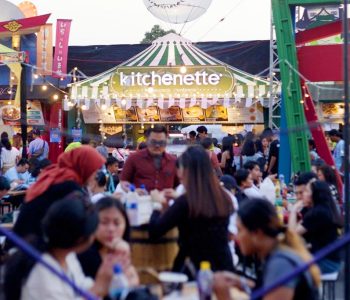 All Night Music and Dancing at We The Fest 2019 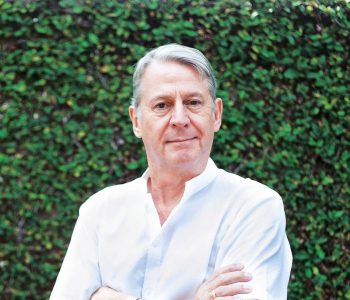