These days, there are many different ways of enjoying travel moments. Some globetrotters dedicate their time to savor the local food during their trip, while others might prefer to visit various historical sites to learn more about the story of their destination. During a recent trip to Valencia in January, I decided to try something different and put my travel focus on the beautiful architecture and design that can be found in and around the city. Guess what? It was actually really fun to explore Valencia on foot and learn about the city’s history, culture and design as told by its many great architectural gems. 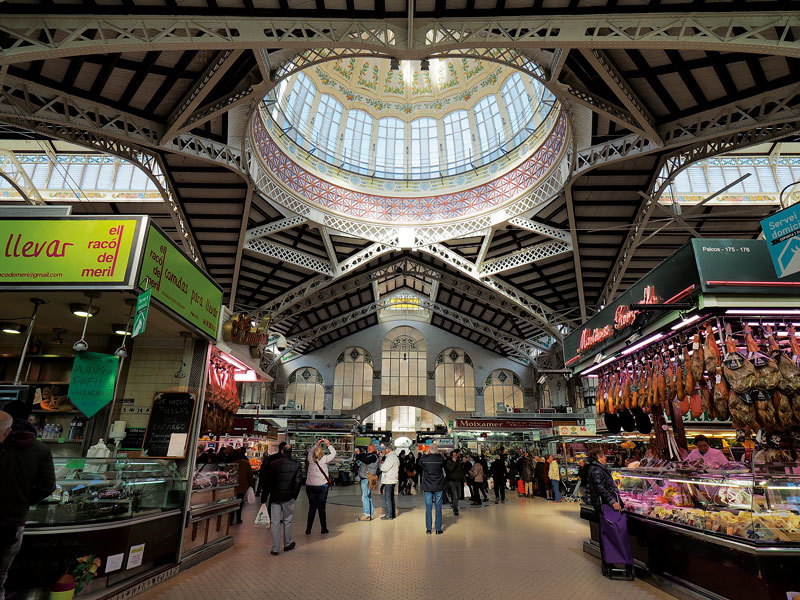 Located just 1 hour and 40 minutes away from Madrid, traveling to Valencia is quick and comfortable using the high-speed train. In the beginning, I was not really sure what to expect when we decided to visit this city. However, everything changed once I started to explore the old town. I started to see grand heritage buildings juxtaposing contemporary design and how they are blending together in harmony.

Mercado Central: Not Your Everyday Market
Visiting a local market in a foreign country is something I always love to do as it usually allows us to see many indigenous things that might not be found elsewhere. In Valencia, the central market, known as Mercado Central, is not only famous for its various fresh products and dried meats, but also for its stunning design. Built between 1914 and 1928 by Francisco Guardia and Alejandro Soler, this stunning market is a showcase of great modernist style of architecture. It is also one of the largest markets in Europe with a surface area of over 8,000 square metres.

The modern Art Nouveau style is visible in the beautiful stained glass with patterned tiles on the building façade. The architects wanted to show the power of iron and glass to permit the construction of large open spaces, though they still utilized domes at the crossings. As a result, Mercado Central is not only a great place to find Spain’s best local products but also offers something for the eyes, as it is a remarkable architectural masterpiece to admire. Getting lost in a market has never been this fun before! 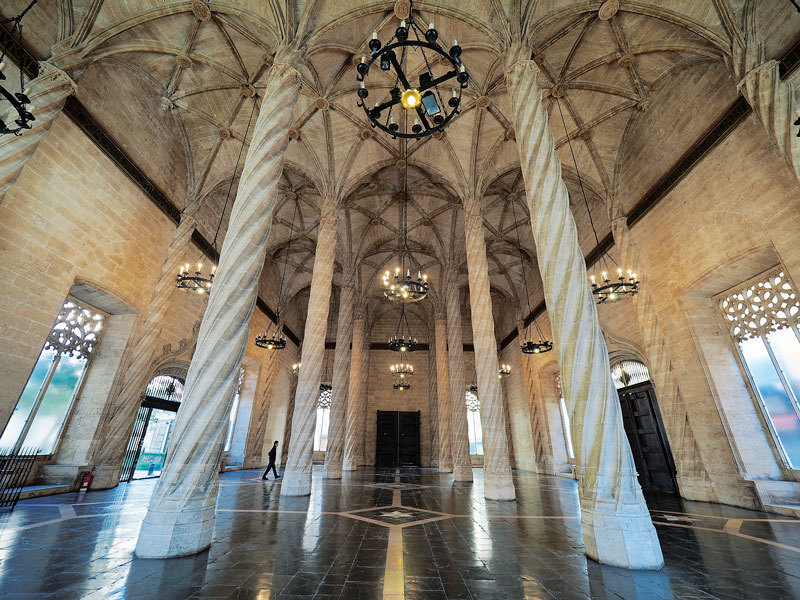 Lonja de la Seda: Where Drama and Design Collide
Not too far away from the market and still within Valencia’s old city part, I found another architectural gem called Lonja de la Seda, also known as the Silk Exchange building. In contrast to the modernist style of Mercado Central, Lonja de la Seda, built between 1482 and 1548 by architect Pere Compte, is a stunning late Gothic style design building that was named a World Heritage Site by UNESCO in 1996.

Pere Compte’s design of Lonja de la Seda perfectly captures the power and wealth of Valencia as one of the great mercantile cities in the past. From the outside, the building looks like an old Medieval castle based on the rigid appearance of a stone-wall fortress. Upon entering, you will find yourself inside a beautiful Moroccan-style garden called the Orange Patio. But the main highlight here is the Sala de Contratacion (The Contract Hall), often referred to as The Hall of Columns – it is filled with eight gorgeous spiral columns. And when you look up to the ceiling, your admiration will grow even further as it is lavishly shaped in Mediterranean palm-trees. Don’t forget to head upstairs to The Golden Room, where the ceiling is a true masterpiece of Gothic woodwork, featuring hundreds of hand-carved individual scenes inlaid with gold and confirming the theory that the architect put a lot of attention to the ceilings of this building as a special accent. It is definitely one of the most dramatic places I have ever seen.

Ciutat de les Arts i les Ciencies:
A Visit to The Future

I have never known that Valencia is home to one of the world’s best futuristic architectural designs called Ciutat de les Arts i les Ciencies (City of Arts and Sciences). The whole complex looks like part of Stanley Kubriks’ Space Odyssey! Designed by Santiago Calatrava and Felix Candela, this complex is an entertainment-based cultural and architectural destination and part of the ’12 Treasures of Spain’. 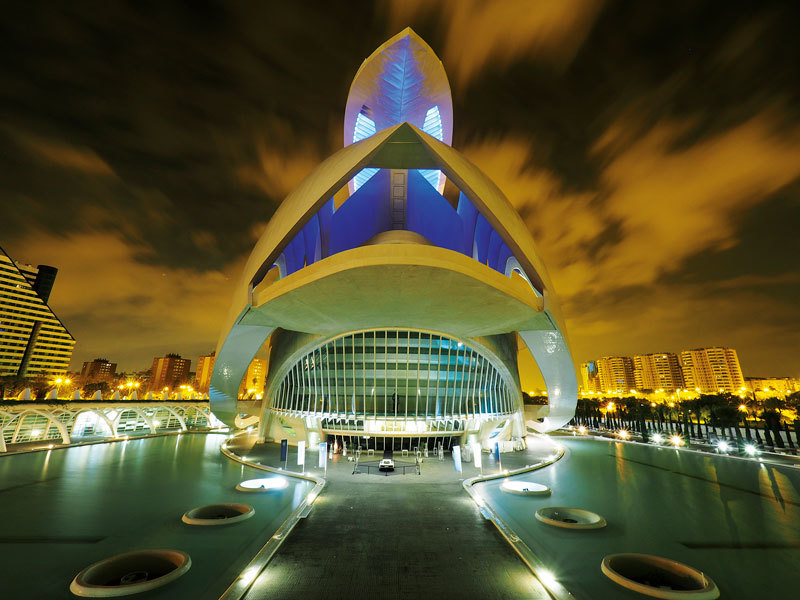 Located at the end of the former riverbed of the river Turia that is now drained and has been turned into a picturesque sunken park, this ambitious government project began construction by the end of 1994 and was finally completed in 2005. The highlights in this grand complex include the IMAX cinema cum planetarium and laserium called L’Hemisferic in the shape of a gigantic eyelid that opens to access the surrounding water pool; a science museum called El Museu de les Ciencies Principe Felipe built in geometrical style; an open structure landscape named L’Umbracle featuring various plant species indigenous to Valencia under 55 fixed arches and 54 floating arches that stand at 18 meters high; an open air oceanographic park called L’Oceanografic; the stunning opera house El Palau de les Arts Reina Sofia, which is surrounded by water; a white cable-stayed bridge crossing the Turia riverbed called El Pont de l’Assut de I’Or;  and L’Agora, a concert and sporting event venue.

This is a place where you’d actually need a couple of days in order to appreciate the entire design and architecture. The thought process behind this project is simply outstanding and out of the box. I believe it to be one of the greatest treasures of modern times that one should see at least once in a lifetime. It has even inspired Hollywood to come and shoot on its premises – if you remember George Clooney’s last movie ‘Tomorrowland’, it was largely filmed around this complex. Now that I have seen it myself, I can definitely understand why. I wouldn’t be surprised if Santiago Calatrava and Felix Candela turn out to be Martian as their design is really out of this world!

Epilogue
In my opinion, Valencia is one of the best destinations to visit in 2017. It offers everything from history, culture, design and architecture to Michelin-starred restaurants and great hospitality service. Although my visit was short, it was definitely a memorable one.

Erza S.T. is the founder of Indonesia Opera Society and has helped contribute to the citys classical music scene. An avid traveller, he writes about his forays around the world for NOW! Jakartas travel section. 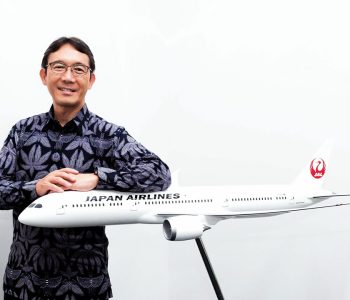 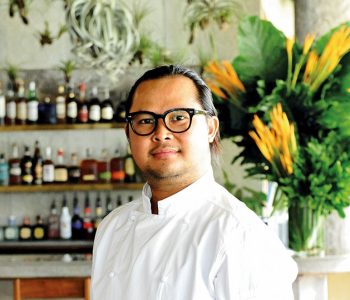 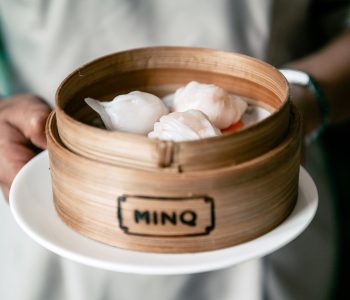 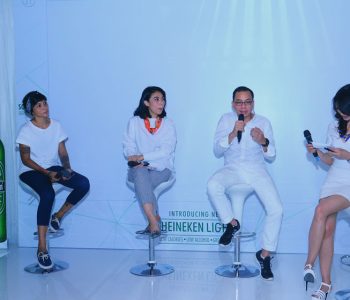 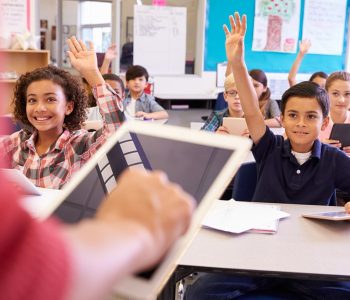