Dubai attracts everyone’s eyes with the hottest offerings – from luxury to affordable shopping, from nature to culture, from state-of-the-art technology to modest living – there’s always something new waiting to be discovered. It’s truly an inspirational destination that would make your visit a very special one. 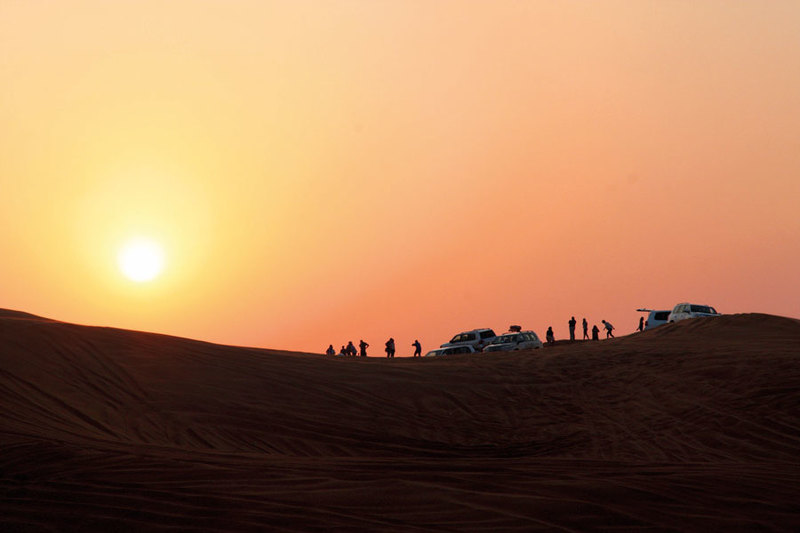 Between the time oil was first discovered in Dubai in 1966, and now, much has changed in the United Arab Emirates’ largest and most populous city. The city literally developed from bare desert to hosting the tallest building in the world in a matter of decades.

Dubai, which represents the UAE’s ambition to be “the most” country in everything, is always on to amaze the universe with first-class infrastructures and attractions in every field.

To begin with, many visitors find Dubai fascinating due to its history and the Emirati culture that is still very much alive.

To discover this true cosmopolitan oasis, begin the journey in its downtown area, which is home to a number of record-breaking attractions – including Burj Khalifa, the world’s tallest skyscraper that stands at 828 metres. Given its height, Burj Khalifa would be the perfect place to take in breath-taking views of the city’s landscape. No visit is complete without a requisite Instagram selfie at the place that has been ranked as one of the top three selfie tourist attractions globally – that is, according to the UK-based Attractiontix, which analysed 219 million Instagram posts between October 2010 and January 2015. Give your visit an oomph by purchasing the VIP ticket to reach the observation deck At The Top, Burj Khalifa SKY, spread across levels 148 and 125. 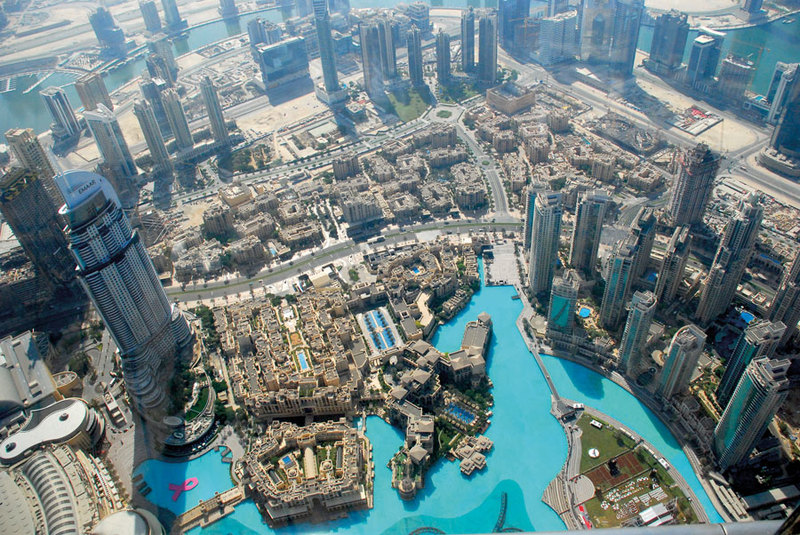 At the foot of Burj Khalifa lies Burj Lake, which hosts the world’s second largest choreographed fountain system also known as The Dubai Fountain. At 6 PM every day, The Dubai Fountain shoots choreographed jets of 22,0000 gallons of water into the air every 30 minutes accompanied by Arabic, Western and classical songs, illuminated by more than 6,000 lights.

Families with children will appreciate the many attractions Dubai has to offer. For one, head to the 10 million-litre Dubai Aquarium and Underwater Zoo inside The Dubai Mall. There are a number of ways to experience it, from walking through an underwater tunnel, literally under sharks, rays and more than 140 species of aquatic animals. Don’t miss out to see King Croc, one of the largest crocodiles in the world from Queensland, Australia, which weighs 750 kilograms with 60 razor-sharp teeth to boot.

Another sensational destination to explore is The Lost Chamber Aquarium at the iconic resort Atlantis The Palm, which houses sharks, stingrays, piranhas, lobsters and the tiniest of seahorses. Based on the fabled lost city of Atlantis, this magical cluster of underwater tunnels is located beneath Atlantis and serves as an immersive experience into the lost civilisation. It’s also where visitors encounter the most amazing and colourful collection of underwater life in 10 beautiful chambers. Visitors can tickle sea cucumbers, hold a starfish in their hand, see rare albino alligators and feed the fish. The location of the Aquarium is surrounded by five-star luxurious accommodations each boasting quiet yet stunning views of the Arabian Gulf.

For more water-induced excitement, head to Dubai Marina in the southern part of the city. Here you can rent a speedboat or take on the yacht to check out a buzzing district of skyscrapers forest stretching from Sheikh Zayed Road to Jumeirah Beach Residence (JBR). A sight that definitely catches the eye is Cayan Tower, a luxury apartment building that spirals by an amazing 90 degrees. 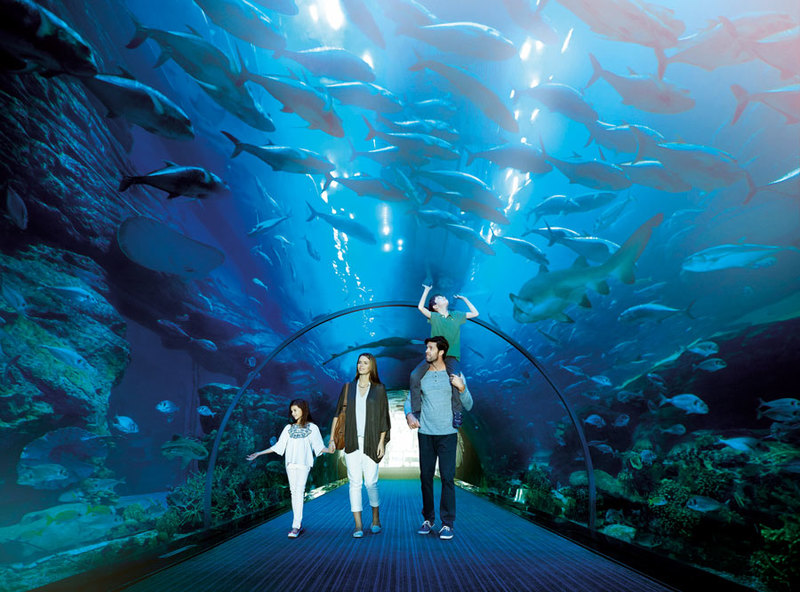 Onto Ain Dubai, set to be the world’s largest ferris wheel, which is currently under construction on the new Bluewaters Island development. That, along with residential property, entertainment, retail and hospitality, monorail system and pedestrian bridge. Oh, did we also mention private beaches?

Dubai Frame, a huge structure that’s literally shaped like a picture frame, encourages visitors to look at both sides of the city, its heritage and its future. With two 150-metre towers linked by a bridge, visitors are able to take in the skyline, while being part of it. There will also be a museum on the ground floor to showcase the transformation of the Emirates.

Also meet The Tower, a high-rise inspired by Islamic architecture and a blooming lily set for completion in 2020. Standing 100 metres taller than Burj Khalifa, the Emaar Properties Group project will truly be a sight to behold. 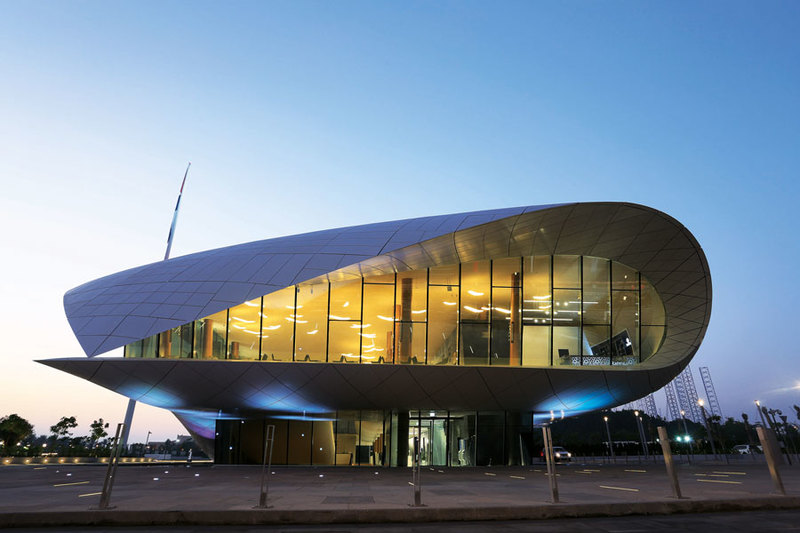 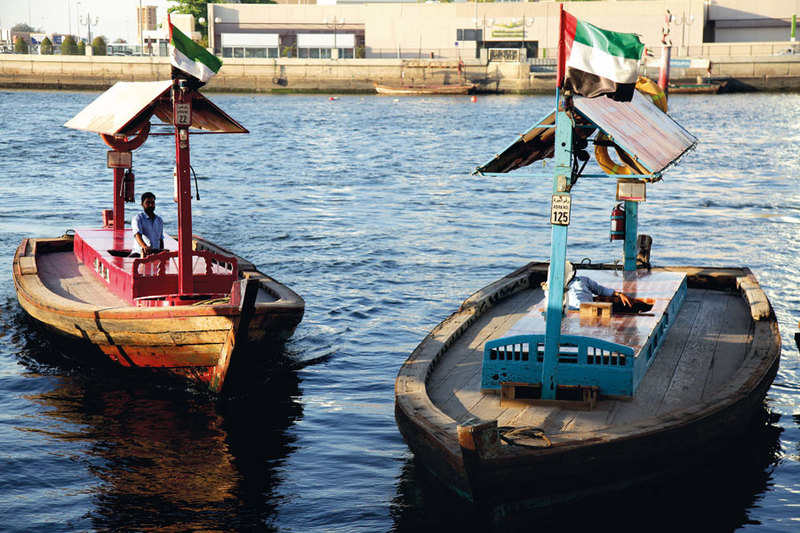 Don’t miss out on La Perle, created by Franco Dragone, who was one of the founding fathers of the iconic Cirque du Soleil. The spectacular aquatic was brought to Dubai by Al Habtoor Group and takes place in the 1,300-seat theatre within Al Habtoor City.

With the stage being a gigantic pool holding 2.5 million litres of water, visitors can watch daredevil acrobats from artists specialising in a range of acts – contorting, diving from 35 metres high and swinging at speeds of four metres per second, simply wowing the audience as they perform death-defying aerial and aquatic tricks.

Dubai also provides educational recreations for nature lovers. Located at City Walk, The Green Planet is the region’s first bio-dome that replicates a tropical forest with more than 3,000 plants and animals – including South American toucans, crocodile lizards and the newest members: a pair of mischievous Tamarin monkey twin brothers. The first stop here is the “flooded forest”, where visitors can take a look inside a giant aquarium filled with arapaima, arowana and stingrays. Visitors will also be guided to the top of the bio-dome for panoramic views of a giant 25-metre-high tree, the largest indoor man-made and life-sustaining tree in the world.

Visiting Dubai doesn’t get any more adventurous than exploring its desert. Before watching the glorious sunset, mounting a camel, sand skiing and enjoying a traditional meal as well as watching a traditional belly dance and Tanura performance around the campfire under a starlit sky, strap yourself into your 4×4 for a high-octane rollercoaster ride across the dune. Mind you, dune bashing is not for the faint-hearted. It’s fast and furious, Dubai-style.

For those looking for an authentic slice of Dubai life, get in the traditional Abra, a wooden open-topped boat that has been plying the waters of Dubai creek for years. Jostle for a seat with all the daily commuters and tourists who want to cross between the Deira and Bur Dubai and vice versa.

When you arrive at Bur Dubai, take a stroll to the heart of Al Fahidi Historical Neighbourhood. Pop into the Sheikh Mohammed Centre for Cultural Understanding (SMCCU), which was set up to help international visitors better understand the local culture, as well as give tours of Dubai’s historical landmarks. SMCCU also hosts traditional meals to be enjoyed for breakfast, brunch or lunch, served over talks about life in the Emirates. As a note, no questions go unanswered.

Al Fahidi Historical Neighbourhood also houses Al Fahidi Fort, home to the Dubai Museum. The museum – the city’s oldest building – tells stories of Dubai Past and is also the place to trace the growth of the Emirates from a fishing village to a cosmopolitan metropolis.

Another highly recommended museum is the newly launched Etihad Museum. Built on the historic spot where the union was formed, the museum allows visitors to digest deeper the history of the UAE with a particular emphasis on the period between 1968 and 1974 through interactive modern technology equipment.

Today, both sides of Dubai – old and new – are waiting to be explored. Whether you’re in town for business or pleasure, long or short, Dubai is waiting for you to create your very own memories there. 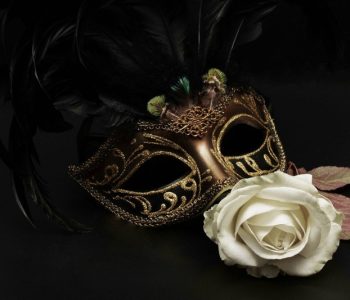 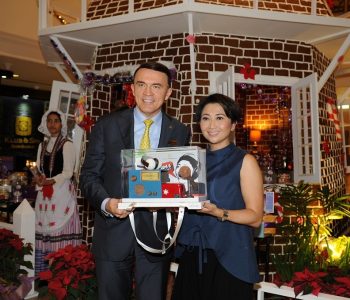 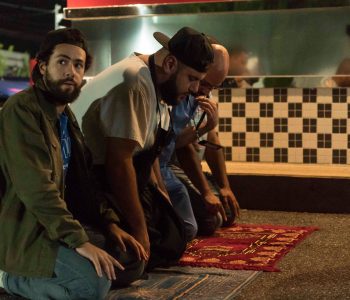 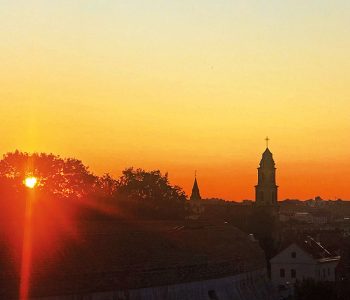 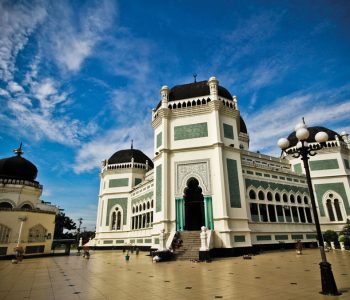